#1 THE BOILER ROOM – This end of the building was added in 1905, faithfully matching the stonework of the main building. Very little of the machinery inside the building remains because it was sold to the Japanese just before World War II. Our understanding of the machinery, which operated until 1924, is based on a few rare photographs and archives, and on ongoing archaeological work.

This end of the building once contained a 200-hp Babcock and Wilcox coal-fired boiler, which produced steam for both heating and electrical generation. The boiler's exhaust left the building through the chimney flue in the northwest corner of the room. This chimney was topped by a cast-iron smokestack that rose high above the roof, and its remains lie at the end of the pedestrian ramp leading down to west entrance of the building. Coal for the boiler was brought in picturesque iron wheel-barrows to the coal pile.  Steam was piped to #2 THE HYDROELECTRIC ROOM and also to the pumping machinery in order to thaw it during cold weather.
#2 THE HYDROELECTRIC ROOM – This room contained a steam engine that was used to drive a 200-hp electrical generator. It also contained a 200-hp hydroelectric generator powered by water from the canal. On the right are two large openings. Water from the upper canal rushed through the first opening (the penstock), spun the turbine, and flowed away through the second opening. The electricity was sent up the hill to pump water from the reservoir into a water tower in Byrd Park, while also providing electricity for the building.
#3 THE PUMP ROOM – Now we enter the original building opened in 1883. This cavernous room was once filled with three huge water wheels (later turbines) each with a set of triplex pumps. Water came in through the three large openings (penstocks) in the north wall, spun the turbines, and exited through tunnels underneath the stone walkway. Each set of three pumps could move 4 million gallons of water per day more than 170 feet uphill to the Byrd Park Reservoir. Thus, the total pumping capacity per day was 12 million gallons of water, or approximately 17 Olympic-size swimming pools.  It is important to remember that no electricity was used to run these pumps – only water power. The picture in the middle was taken by Harris Stilson and provided by Matt Brown.
The machinery in the northwest corner (seen below) controlled the flow of drinking water being fed to the pumps. Originally, Richmond’s drinking water came straight from the river. Later, settling tanks were added to improve the water's clarity, though chlorination wouldn't begin until 1913. Unsurprisingly, the death rate from cholera and other waterborne diseases dropped suddenly thereafter. 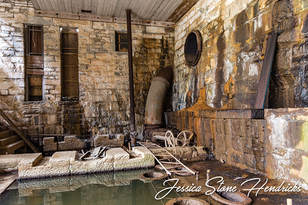 The cast-iron spiral staircase in the northwest corner of the room went up to a catwalk, which allowed the the tie rods attached to the crankshaft of the pumps  to be greased and serviced. A second set of stairs led to another catwalk on the south wall that was used by visitors to view the pumping machinery in action.
#4 PUMP HOUSE PAVILION - The second floor of the building contains the famous pavilion, its Tudor arches originally open to the air on both sides. Unfortunately, the workmen below complained that water dripped on the machines during inclement weather, leading to the installation of windows on both sides around 1899. Purple and gold stained class windows in the arches would have created a stunning light source during the day. At some point, possibly in the 1980s, the windows on the south wall were removed. The pavilion was used for a variety of different social events during the Pump House's heyday, including dances and banquets.
#5 POWDER-ROOMS - At each end of the pavilion were powder-rooms: gentlemen on the west, ladies on the east. The building was not connected connected to the sewer system, so all waste flowed into the lower canal outside.
#6 OFFICE & MAP ROOM - The east room was last used as an office and store room for maps.
​In 1924, the Pump House was replaced by the white Italianate building to the east. Its two hydroelectric turbines, now disused but intact, generated power for the electrical pumps, which were far more efficient than the water-powered ones used in the old Pump House. 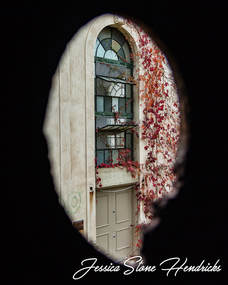